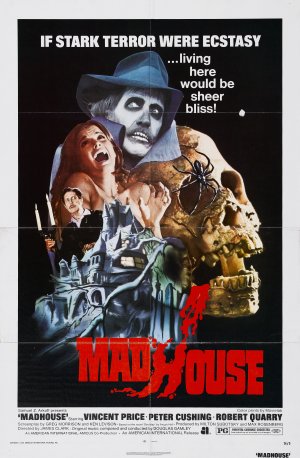 Madhouse (1974) is a collaboration between American International Pictures, whose horror films were often recognized by their vibrant colors and odd lenses and angles, and Britain’s Amicus Productions, which specialized in contemporary horror (leaving Hammer to pursue the period Gothic). Directed by Jim Clark, the film features two of horror’s giants, Vincent Price as Paul Toombes and Peter Cushing as Hebert Flay. In addition, Robert Quarry stars as Oliver Quayle, who played the titular Count Yorga, Vampire (1970), and is at one point seen at a costume party looking very much like the count (Peter Cushing is also seen in a vampire costume as an ironic nod to his portrayal as Van Helsing in Hammer’s 1958 Horror of Dracula). Quarry was originally set to succeed Price as AIP’s main horror star, but the declining favor of period Gothic films meant that this never came to fruition. Adrienne Corri nearly steals the show as the damaged and creepy Faye, who resides in Herbert’s basement with her spiders, which she calls her “babies.”

The plot of Madhouse is intriguing in its conception, but largely frustrating in its execution. We meet horror icon Paul Toombes at a party where he announces his engagement to the much younger Helen, who he then finds out from Quayle had previously done adult films. He reacts expectedly poorly to this news and Helen retreats to her room where she meets a masked killer. Toombes goes up to her room to apologize, only to have her head fall off and to have Price give a priceless reactionary scream. Placed into a mental asylum, Toombes is released and asked by his friend Herbert Flay to revive his popular role as Doctor Death for a new film. Of course, more bodies start piling up and Toombes goes between fits of declaring his innocence to suspecting that perhaps he is the one to blame.

The first half of the film is actually quite strong. The plot is clear and the kills are stylistic. However, by the second half the narrative becomes jumbled and unbelievable. There were inklings of a great premise, promising psychological complexity, which ultimately becomes too bogged down in literalism. The film’s unimaginative commitment to have everything on screen taken at face value ultimately stilts the experience and strains the audience’s ability to suspend disbelief. More examination of alternate perspectives and of our faulty notions of reality would have quickly compelled this movie into another league. Heavily influenced by Italian giallo films, the literalism creates far too many plot holes, not the least of which is that the person who is revealed to be the killer is very clearly in a different place when one of the killings is being committed. With a more psychologically nuanced script, what comes off as campy and uncontrolled would quickly become creepy and compelling.

All this is not to say that Madhouse is not an entertaining film. Seeing Vincent Price and Peter Cushing sharing the screen is reason enough to watch and derive enjoyment from it. This would be the last AIP film for Price, and the movie is in many ways a goodbye love-letter to Price celebrating his horror career with them. We see clips of Price’s earlier AIP movies throughout the film, played as clips of Toombes’s Doctor Death films (this also accounts for the odd opening credits which read: “With special participation by Boris Karloff [and] Basil Rathbone,” both of whom were dead by this time but who appear in the film clips). Also, the song heard over the end credits is sung by Price.

Fans of Price and Cushing will have plenty to keep themselves entertained throughout Madhouse, even if it is not an especially good film, despite its potential to be so.

Believing I was embarrassingly uneducated on the vaunted subgenre of nunsploitation, I decided to give the Italian film The Sinful Nuns of St. Valentine (1974), directed by Sergio Grieco, a go. The film stars Françoise Prévost and Jenny Tamburi, who appeared in many giallo films.

What surprised me is actually how reserved much of the film is and how seriously it takes itself. Truthfully, I found the plot, set during the Inquisition and dealing with such concepts as corruption, zealotry, bigotry, and betrayal, not to mention lust and desire, oddly compelling at times. I expected to laugh and give my eyes a roll but I found myself interested in the characters and their fates. That’s not to say this film is a great movie by any stretch of the imagination. It certainly has its budget constraints and the exploitation aspects are oddly handled, but Grieco actually tried to tell a story amid the naked nuns, which don’t really appear until the end.

The film even throws in a sober message or two, such as when the High Inquisitor states that “Fanaticism is often nothing more than the other face of madness.” What I thought would be a schlock-fest was actually quite watchable, which admittedly may say more about me than it does about the quality of this film.