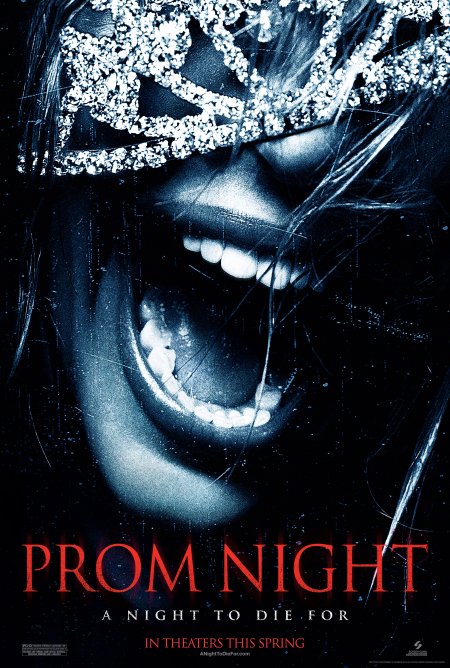 2008’s Prom Night, directed by Nelson McCormick, would have us believe that it is a remake of the 1980 Jamie Lee Curtis Canadian slasher, but the similarity goes only so far as the name. I admittedly am not a fan of the 1980 film as I find it fairly dull (I much prefer Terror Train, which Curtis had starred in that same year). This new film follows Donna, played by Brittany Snow, whose family was murdered by an obsessive teacher. Three years later she’s preparing for prom and, of course, the madman escapes custody and goes searching for her.

While I get bored with the original, it’s nonstop quality entertainment when compared with this new teen-targeted commodity. The acting is bland, the dialogue nauseating, the plot formulaic and predictable, the characters flat, and the directing uninspired. It’s amazing how the instantly forgettable killer is able to take out most of her friends in the most bloodless of methods. Truly, it is astounding that he can continually stab people in places that they will not bleed.

If one had to endure this film for whatever unfortunate reason, a good drinking game would be to take a shot each time a fake, clichéd jump scare occurs (two shots if a mirror is involved). You will be seeing double halfway through the film, and it might not only make the viewing endurable, but you may even see what the psycho-stalker killer sees in Donna, because my sober self didn’t buy it.

This review is a lazier attempt than most of my others, but this is the only way I can manage to keep thinking about this awful, awful film. So as to spend less time on this film, I’m going copy and paste a portion from my review of One Missed Call because the same message applies: I have seen countless terrible, mostly low-budget horror films that are easily forgettable and often times laughable. However, these bombs are usually made with the best intentions, and even though they are lacking in almost every other way, they contain some heart in their creation. This film, however, is nothing more than a cold, calculated profit machine meant to separate young teens from their parents’ money. It is the horror genre’s equivalent of a boy band.

Prom Night might even be able to take the tiara from One Missed Call for worst horror film of 2008, so there’s an accomplishment.