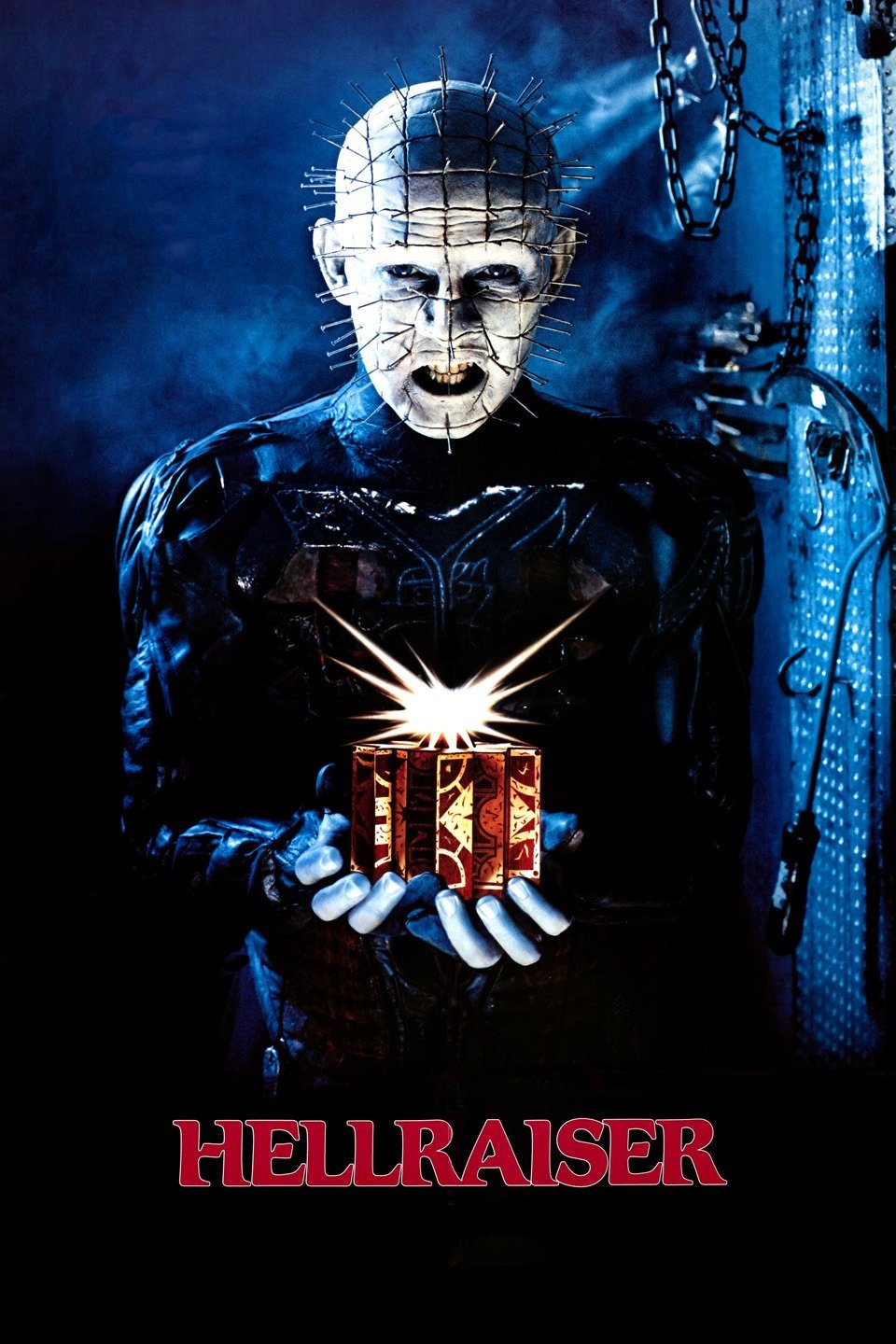 Something has to change.
Undeniable dilemma.
Boredom’s not a burden
Anyone should bear.

Constant over stimulation numbs me
But I would not want you
Any other way.

Clive Barker’s Hellraiser (1987) is the onscreen adaptation of his own novella, The Hellbound Heart. Being dissatisfied with the way other directors had handled his material, Barker decided to try his own hand at bringing his vision to the screen. As a kid in the late 1980s the Hellraiser series held a particular fascination with me. I was vaguely aware of the Cenobites and especially of Pinhead, and the rotating wooden posts, creaking and knocking, covered with gruesome, gory flesh like Satan’s own art show, in many ways signified in my mind the epitome of horror. Its strong overtones of torture and sexuality were not lost upon me, and that it dealt directly with Hell only added to its horrific credentials. When I finally saw the film at some point, probably as a teenager, I recall being largely impressed, especially with the effects. Yet at the same time, something didn’t sit right with me.

It’s not enough.
I need more.
Nothing seems to satisfy.
I said
I don’t want it.
I just need it.
To breathe, to feel, to know I’m alive.

Finger deep within the borderline.
Show me that you love me and that we belong together.
Relax, turn around and take my hand.

I normally don’t bother with recaps other than a line or two about the plot, but discussion of films such as this require a more detailed basis from which to begin. The story tells of Larry Cotton (Andrew Robinson) who moves into his childhood home with this wife, Julia (Clare Higgins). Larry finds signs that his hedonistic ne’er-do-well brother, Frank (Sean Chapman/Oliver Smith), has recently been squatting there. Larry’s daughter, Kirsty (Ashley Laurence), has an apartment nearby but her strained relationship with her step-mother keeps her at bay. Enter into all of this a mysterious puzzle box which opens a portal to Hell (or at least a pocket dimension very much like it) which Frank had used in the hope of receiving experiences like no other. He had grown too desensitized through his debauchery to what the world had to offer and needed more, searching in the box for a door to unknown carnal pleasures, unaware of the Cenobites lurking within and their methods of torture which awaited him as they pulled him into their realm. Some spilled blood inadvertently brings Frank back from the dead, helped along by Julia, with whom he had had an affair and who still bears a torch for him. Like him, she is bored with her life and wants to rekindle the physical pleasures she felt with him, and she sets out to lure unsuspecting men back to him where they can be brutally dispatched and bled to feed Frank with ever more life-giving blood. However, if the Cenobites discover his whereabouts, Frank is a goner.

I can help you change
Tired moments into pleasure.
Say the word and we’ll be
Well upon our way.

Blend and balance
Pain and comfort
Deep within you
Till you will not want me any other way. 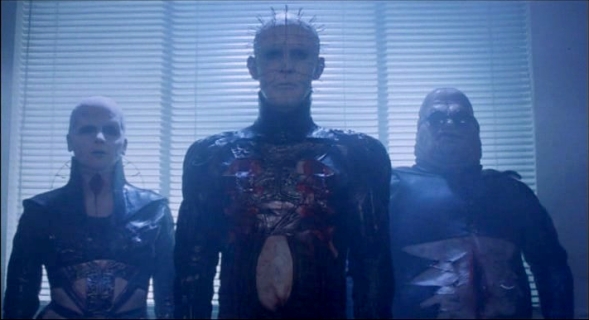 Barker updates Hell with a contemporary vision that adopts the pastiche of sadomasochism, complete with black leather and jangling chains. Sexual overtones are apparent in the Cenobites, such as the female one whose neck is pulled open like a gaping vagina. At the height of the AIDS crisis sex has become something to be feared as much as to be desired. The Cenobites operate in extremes – suffering and sexual satisfactions are indiscernible to them. The lead Cenobite, who in subsequent films will be named Pinhead, played expertly by Doug Bradley, refers to himself and his cadre as “Explorers… in the further regions of experience. Demons to some, angels to others.” In this world Hell is real, but heaven appears nothing more than a happy fiction.

It’s not enough.
I need more.
Nothing seems to satisfy.
I said
I don’t want it.
I just need it.
To breathe, to feel, to know I’m alive.

Knuckle deep inside the borderline.
This may hurt a little but it’s something you’ll get used to.
Relax. Slip away.

In an age of excess, where sensory overload and immediate gratification are cultural norms, people come to want ever more in order to feel. In Barker’s dark world people don’t have to be sent to Hell, as Hell can patiently wait for its victims to willingly come to it. The puzzle box, though it’s unclear how it actually works, is an ingenious narrative mechanism for puzzles inherently represent an insatiable curiosity. Dissatisfied with reality, people will court damnation in order to overcome their dumbness, but they get more than they bargained for. As Frank tells Julia, “I thought I’d gone to the limits. I hadn’t. The Cenobites gave me an experience beyond limits… pain and pleasure, indivisible.” In a way, the Cenobites are like naïve children playing with a fragile kitten, unable to distinguish in its cries play from torture.

Something kinda sad about
The way that things have come to be.
Desensitized to everything.
What became of subtlety?

How can it mean anything to me
If I really don’t feel anything at all? 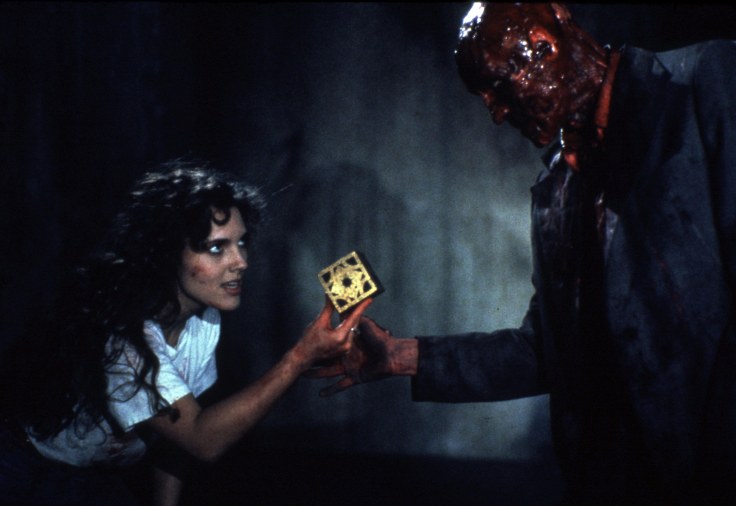 Hellraiser deals with deep adult themes in an extraordinarily fantastical way. This, to me, is where the film’s true strengths lie. Helped along by some stellar practical effects, and hindered at times by some poor ones, Barker creates a visceral world that the viewer can practically smell. However, this is partly where the problem rests with me, and what sat uneasily with me when I first watched it all those years ago. The film is, to put it bluntly, ugly (and I’m not just talking about Julia’s very timely fashion sense). The sets are perpetually filthy and we see the actors, all of whom are quite good, interact with it as though it wasn’t covered with grime, including leaning their white clothes against dirty doors or bearing a willingness to fornicate beside rat-infested muck. Are we to find beauty in this ugliness? Have the characters grown so desensitized to the world that they no longer recognize the repulsively unhygienic? I don’t think so. Rather, it seems to me to be the likely result of a limited budget and few sets. Additionally, for me at least, something about the pacing of the film never sits right with me. It feels longer than it is.

I’ll keep digging
Till I feel something.

My respect for Hellraiser runs deeper than my enjoyment in watching it, and I find that difficult to admit. I entirely understand those who consider this a masterpiece, but I feel that the merits of the film are found more in its themes, and in the rather briefly shown Cenobites, than in the actual filmmaking. Barker’s directorial debut is strong, but it feels like a film that might have been much stronger had more time, money, and experience allowed.

John Carpenter’s Prince of Darkness (1987) is an interesting amalgam of classic horror films, offering us some of their best aspects while also giving viewers a fresh take on the “demonic” story. Horror fans will quickly recognize the overall plot here: a group of people are trapped in a building while malevolent entities try to destroy them from without and within. The group at hand is a research team made up of scientists, a priest, and a theologian. A mysterious, liquefied evil is infecting people, turning them into violent zombie-like soldiers controlled by a malevolent will and who in turn are empowered to infect others. From these elements one can see the influences of the genre’s classics, including The Haunting (1963), Night of the Living Dead (1968), The Legend of Hell House (1973), and even Carpenter’s own earlier masterpiece, The Thing (1982). In fact, this film is the second installment of what Carpenter refers to as his “Apocalypse Trilogy,” which begins with The Thing and ends with In the Mouth of Madness (1994). I have always been a sucker for ensemble horror, and this is no exception. And rather than be distracted by these similarities, they instead pay homage in endearing ways.

The script is smart as it interweaves quantum theory, religious philosophy, and a healthy smattering of pseudoscience in a way that is believable and compelling. The result is not your average tale of good versus evil, or even God versus Satan, but rather a dystheistic scenario in which man is confronted and endangered by the forces of the universe. It takes what man understands of reality and spirituality and turns it upon its head, calling into question the nature of evil and God’s role in the world. There are some genuine scares in the movie and Carpenter builds the tension well, adding some shocking, unsettling imagery. The cast, too, is compiled of capable actors, though there are no stand-out performances.

Unfortunately, the film is sometimes clunky and has begun to show its age. Its pacing, for instance, is unnecessarily slow to start. Carpenter shows some good direction by establishing some character relations, but in the end those relations do not matter much or contribute to any real emotional impact. Despite these relatively minor flaws, however, Prince of Darkness is a horror film with a truly interesting premise. Besides, it’s got a cameo of Alice Cooper as a possessed homeless “schizo,” so what more could you ask for?