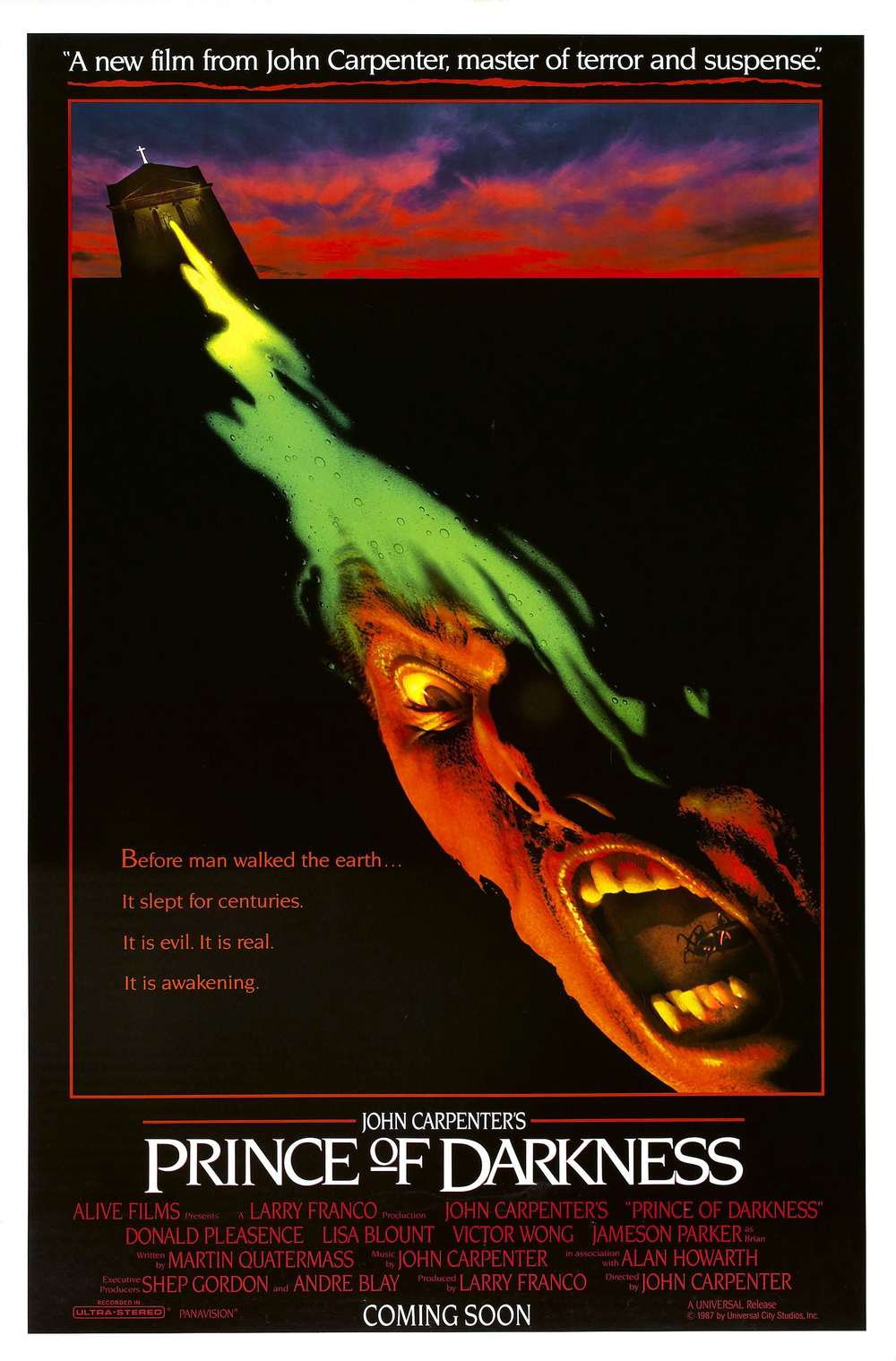 John Carpenter’s Prince of Darkness (1987) is an interesting amalgam of classic horror films, offering us some of their best aspects while also giving viewers a fresh take on the “demonic” story. Horror fans will quickly recognize the overall plot here: a group of people are trapped in a building while malevolent entities try to destroy them from without and within. The group at hand is a research team made up of scientists, a priest, and a theologian. A mysterious, liquefied evil is infecting people, turning them into violent zombie-like soldiers controlled by a malevolent will and who in turn are empowered to infect others. From these elements one can see the influences of the genre’s classics, including The Haunting (1963), Night of the Living Dead (1968), The Legend of Hell House (1973), and even Carpenter’s own earlier masterpiece, The Thing (1982). In fact, this film is the second installment of what Carpenter refers to as his “Apocalypse Trilogy,” which begins with The Thing and ends with In the Mouth of Madness (1994). I have always been a sucker for ensemble horror, and this is no exception. And rather than be distracted by these similarities, they instead pay homage in endearing ways.

The script is smart as it interweaves quantum theory, religious philosophy, and a healthy smattering of pseudoscience in a way that is believable and compelling. The result is not your average tale of good versus evil, or even God versus Satan, but rather a dystheistic scenario in which man is confronted and endangered by the forces of the universe. It takes what man understands of reality and spirituality and turns it upon its head, calling into question the nature of evil and God’s role in the world. There are some genuine scares in the movie and Carpenter builds the tension well, adding some shocking, unsettling imagery. The cast, too, is compiled of capable actors, though there are no stand-out performances.

Unfortunately, the film is sometimes clunky and has begun to show its age. Its pacing, for instance, is unnecessarily slow to start. Carpenter shows some good direction by establishing some character relations, but in the end those relations do not matter much or contribute to any real emotional impact. Despite these relatively minor flaws, however, Prince of Darkness is a horror film with a truly interesting premise. Besides, it’s got a cameo of Alice Cooper as a possessed homeless “schizo,” so what more could you ask for?