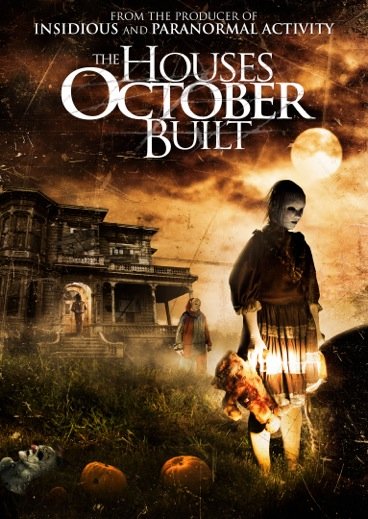 The Houses October Built (2014) is a found footage horror about a group of friends on an RV road trip in search of extreme haunted house attractions, until they are stalked by some of the more unnerving performers and the scares start coming to them. Directed by Bobby Roe, who also stars, and co-written by him and some of the others who also star, the movie begins with an intriguing premise. Halloween haunted house-like attractions are a surprisingly under-utilized setting for horror films, with the main exception being Tobe Hooper’s The Funhouse (1981). The film is part found footage, part docu-style, and although the film is sometimes creepy but not terribly scary, it does actually do a good job of making one apprehensive about visiting such attractions – it unsettles the security one feels that they will be untouched. Who exactly are behind those masks? Have there been background checks? What’s to stop a killer from dressing up and taking people out, hiding them amongst the fake body parts and theatrical blood?

As has been mentioned, there are some creepy parts to The Houses October Built, particularly one involving a girl in a porcelain doll mask. And if you’re afraid of clowns, there’s plenty of them around. The narrative actually owes a lot to The Blair Witch Project (1999), with thuds on an RV standing in ruffles on tent fabric.

However, the movie falls into some of the unfortunate traps of found footage that ironically could have been fixed with a few more lessons from Blair Witch. Firstly, we’re never given a convincing reason as to why these people would be filming everything. They say they’re documenting their trip, but real people would forget about the camera after constantly being approached by hostile locals and being terrorized by strangers in frightening Halloween costumes. Had they been documentarians committed to the craft, we might have believed their persistence in filming. Also, it would have helped to have more camera perspectives rather than the single hand-held cam and a few stationary shots from mounted cameras (and why was there a camera facing the front of the RV?).

Lastly, Houses pulls its punches far too often, having much of the violence take place off camera. Blair Witch can get away with this because of the mythology it was building and the supernatural nature of the antagonist. But in Houses they’re people in masks and what we have is the equivalent of a slasher film that turns the camera away every time someone is killed. The ending is also abrupt and anticlimactic, and the creepy characters we’ve been seeing are inexplicably replaced by henchmen in skull masks who basically all look the same. There’s simply no pay off, and I for one was left feeling very disappointed.

The Houses October Built does not reach its promising potential, but I could easily see it fitting into a rotation of Halloween films. As said before, there’s really no onscreen violence, and though it’s unrated it could easily be shown on television with very little editing. On its own it’s generally avoidable, but just before going to a haunted attraction it might serve to set the mood perfectly.