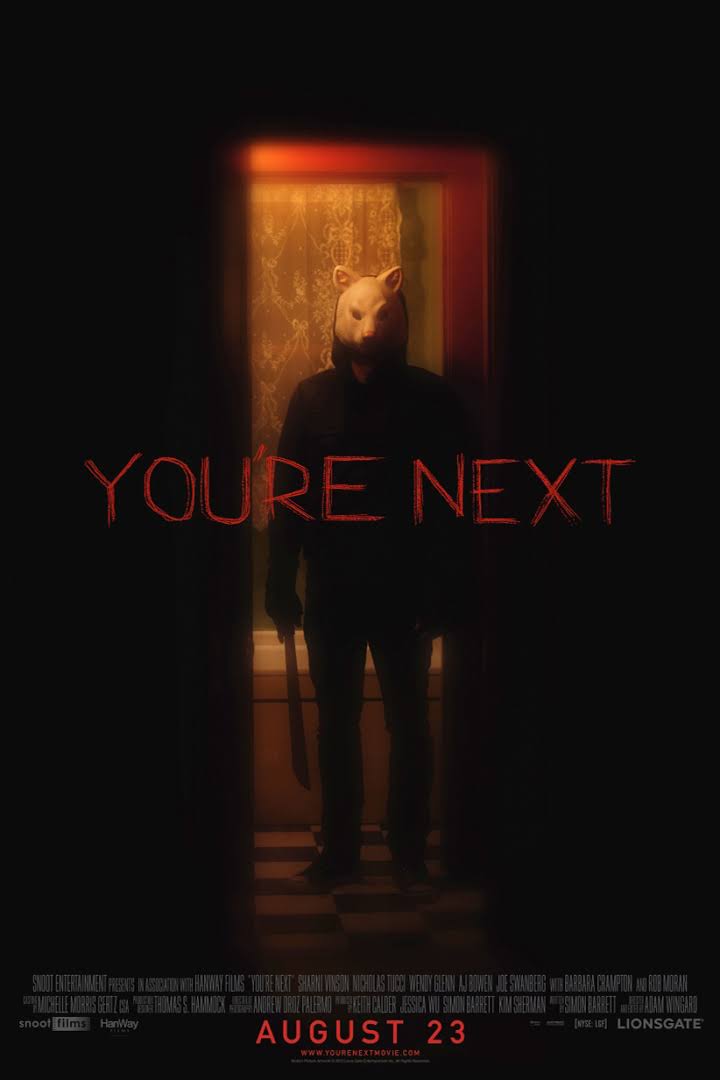 You’re Next, directed by Adam Wingard and written by Simon Barrett, quickly made a reputation for itself when it first premiered in 2011. As a home invasion film, the aesthetic owes a lot to 2008’s The Strangers – inspiration can clearly be seen in some superficial ways, such as the shot compositions, the use of music, the lighting, and of course the masked intruders. However, whereas as The Strangers was a straight-forward, self-serious slow-burn, You’re Next is a romp of gore and bloody antics.

The plot involves a family reunion at a house deep in the countryside. Two wealthy parents have invited their adult children and their significant others to gather for a long weekend, but almost immediately find themselves assailed by masked men wielding crossbows, machetes, and axes. However, one of the guests – the girlfriend of one of the son’s – is surprisingly capable and competent in this intense situation and begins to fight back like a blood-bathed Kevin McCallister.

The plot is too predictable to be scary or shocking, but the gore is practical, abundant, and well-utilized. The film gets rolling quickly and invites the audience to come along for the ride, giving us one of the most memorable final girls we’ve had in years. Really, the majority of the film is generally run-of-the-mill, but the final act makes up for much of that.

There are some flaws. The shaky cam is overused and gratuitous and we learn almost nothing about most of the characters. Having the crux of the film involve close family members requires exceptional acting to portray the grief of losing loved ones, and few of the performers, though some may be notable within the genre, are able to accomplishing this. You never really get a sense that this is a family with history. One actor, however, should be mentioned: Ti West, one of horror’s current notable directors whose films include The House of the Devil (2009), The Innkeepers (2011), and The Sacrament (2013), self-referentially plays a pretentious filmmaker.

In terms of a home invasion film, You’re Next is heavy on gore but light on scares. It’s a fantasy fulfillment we all have (at least I hope it’s not just me) of taking out intruders with extreme prejudice. It’s that body-count kind of slasher where you look forward to the next kill to see what practical effects will be employed, but not because you care a thing about the characters.