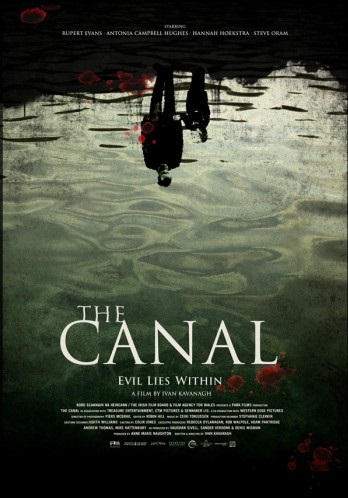 Ivan Kavanagh’s The Canal (2014) is an Irish production about a film archivist named David, played by Rupert Evans, who finds 1902 crime scene footage which took place in his current residence. Shortly afterwards his wife, who he discovers is having an affair, goes missing. He becomes convinced of a supernatural connection to the 1902 murder and his wife’s disappearance and tries to save his son from the malevolent entity he sees stalking them. Of course, as has become cliché with these types of films, we are meant to wonder if the haunting is real or a manifestation of his disturbed psyche.

The Canal has some striking imagery, especially in the final fifteen minutes, and there are obvious influences from The Ring (2002) and many other films which the seasoned viewer will recognize. Unfortunately, much of the film lags on its way to get to the ending and when it finally does, it’s difficult to care. The middle act stretches thin, feeling more like disjointed vignettes than a cohesive narrative. Granted, this is perhaps the filmmaker’s attempt to place us in the main character’s confused and paranoid state, but it quickly becomes apparent that the plot isn’t progressing. The script structures itself as a mystery, but even a casual horror viewer will see the results coming long before they are finally revealed.

There are also some excellent elements introduced into the plot which the movie does not delve deeply enough into, such as the 1902 film or the use of the antique turn-crank camera. (Additionally, as someone who has watched a great deal of silent films, the crispness and clarity of the unrestored turn-of-the-century film was utterly unrealistic, but that is perhaps a personal nitpick.) In a beginning scene David is showing an old film to high school students and refers to the screen actors as ghosts because they’re all dead. This could have served as an intriguing plot device or an analogy but ultimately it all seems to go nowhere. It is left dangling like many other threads whose potentials go unsewn.

With a tighter or more unique script The Canal could have been something notable, but its impressive finale at least allows it to pass with a recommendation, albeit an unenthusiastic one.