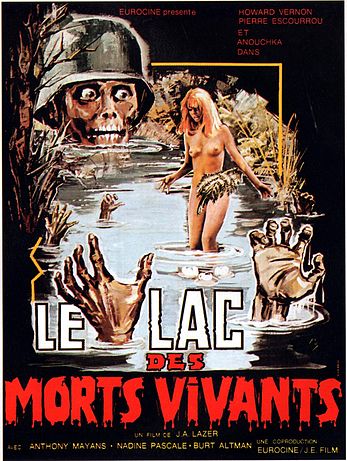 Known in France as Le lac des morts vivants, Zombie Lake is almost unwatchable if not for the bevy of beautiful nude women who were somehow persuaded to appear in the film. The story involves a small French village which during WWII had ambushed and killed a group of Nazis and tossed their bodies into a local “lake” (which is actually a muddy pond). They place a sign that warns against disturbing the water, but a buxom skinny dipper disregards this ill omen and is dragged down by zombie Nazis (which are actually men in atrocious green makeup). These reanimated fascists then repeatedly go into town, by some amazing coincidences find nude or scantily clad females, and inexplicably overpower everyone they meet with their slow, lumbering movements. There’s another subplot involving a Nazi’s daughter, but who really cares at this point?

The laziness of the movie can make one’s eyes glaze over. We find out that the story is supposed to take place in the 1950s despite there being no effort to make it look like anything other than 1980, when filming occurred. The acting is, well, not to be found here. The action appears done in single awkward takes and the sound quality, too, is terrible. Even Rollin was embarrassed by the film, and for years afterward refused to acknowledge he had had any hand in it. For a more competent Rollin film, which mixes sexuality and horror more effectively, see 1979’s Fascination.

Is there anything worth seeing in this film? That answer is simple: nude women, full frontal. I’m at a stage in life where that doesn’t do much to keep my interest. However, the younger, budding pubescent me would have loved to have gotten his hands on a VHS copy of this movie. Unfortunately, I’m a few decades too late, but for that insatiable horndog, I’ll give the film a…