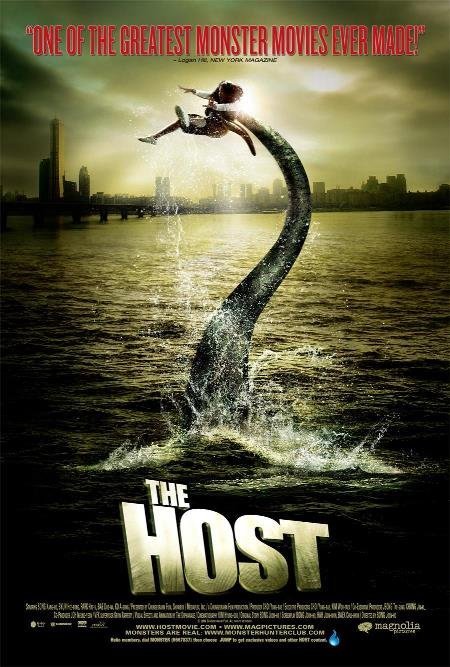 I first saw 2006’s The Host (known in South Korea as Gwoemul, meaning “Monster”) shortly after its release. The reputation which preceded it was impressive: it won numerous awards, critical acclaim, and became up to that time the highest grossing South Korean film ever. With such a pedigree, one cannot go into the film without high expectations. Unfortunately, the copy I watched at the time was dubbed, which can make the experience of watching a foreign film almost unbearable for me (unless it is an old martial arts movie – in that case, it’s part of the charm). It distracts me from the plot and diminishes the acting on screen. In fact, I haven’t watched a dubbed film since. I found the movie enjoyable, though nothing special, yet I vowed to revisit the film at some point with subtitles to see if my impression would change.

Directed by Bong Joon-ho (who would also do 2013’s well-received Snowpiercer), the story begins with a large creature emerging from the Han River, rampaging and destroying and taking a middle-school-aged girl whose flawed, dysfunctional family attempts to save her. Meanwhile, the authorities believe the creature is host to a viral outbreak and begin quarantining areas. Bong Joon-ho’s script hits many emotions effectively, making the audience laugh in one instant before hitting them with a scare or tragic character moment in the next. Watching it the second time these years later I quickly realized I didn’t remember how the latter half of the film went or how it ended, so many of those tragic moments were still able to strike me undiluted. I certainly was able to better appreciate the performances, especially by Go Ah-sung as Park Hyun-seo, the young girl. The scenes with her and the creature in the sewer are absolutely stellar.

In 1954 Japanese filmmaker Ishirō Honda introduced Godzilla to the world. The big lizard’s first appearance is unlike his later incarnations where he’s seen as some kind of hero. Instead, he was meant to symbolize the destruction of Japan by nuclear weapons which the country had experienced first-hand less than a decade prior. He embodied the fears and resentments of the Japanese stemming from the detonations over Hiroshima and Nagasaki and the firebombing of Tokyo by the United States. Similarly, The Host is a metaphor for American intervention and the South Korean government’s habit of continually acquiescing to U.S. will. In the beginning we see an incident based upon a real account which occurred in the year 2000, and we are given it to be a possible origin for the Han River creature. We see a U.S. army coroner telling his South Korean assistant to dump dozens of bottles of formaldehyde down the drain because the bottles are dusty. The coroner is more concerned about his little personal space than about the effects his actions will have on the environment and the populace, and the assistant is willing to comply even though he knows the chemicals will end up in the river system. Similarly, controversy continually arises in South Korea regarding U.S. bases and their effects on the local populations. In the next scene we see a man commit suicide, leaping from a bridge into the Han River, and he becomes the creature’s first human meal (that we know of). South Korea had seen many such suicides in the early part of the new millennium as the nation was racked by financial troubles, and it’s perhaps symbolic that the first victim is a South Korean man literally throwing his life away. Put these two scenes together and the creature is, in essence, the result of American pollution and arrogance and the failure of South Korea’s willingness to stop it.

The second half of the film becomes more of an outbreak narrative, where we see news reports of the United States (accompanied by footage from the Iraq War) and the W.H.O. blaming the South Korean government for their ineptitude and proclaiming their need to take direct intervention action. They devise a plan to release a chemical called Agent Yellow (an obvious nod to Agent Orange with a satirical flair) which will effectively poison the area, again taking little regard for the local populace. It makes one wonder if the true “host” is actually South Korea housing an American infection.

The film is not entirely anti-American. It shows the bravery of the U.S. military and seems to give an appreciative acknowledge to its proactive approach toward danger. Nevertheless, it appears to be a film about South Korea’s need to wake up and assert itself more effectively. There are those we love and respect who nevertheless need to be put in their place at times. Yet these geopolitical themes aside, The Host is a fun monster movie that both embraces and defies the big creature-feature narratives of the 1950s. It’s smart, suspenseful, and not afraid to be ponderously sad.