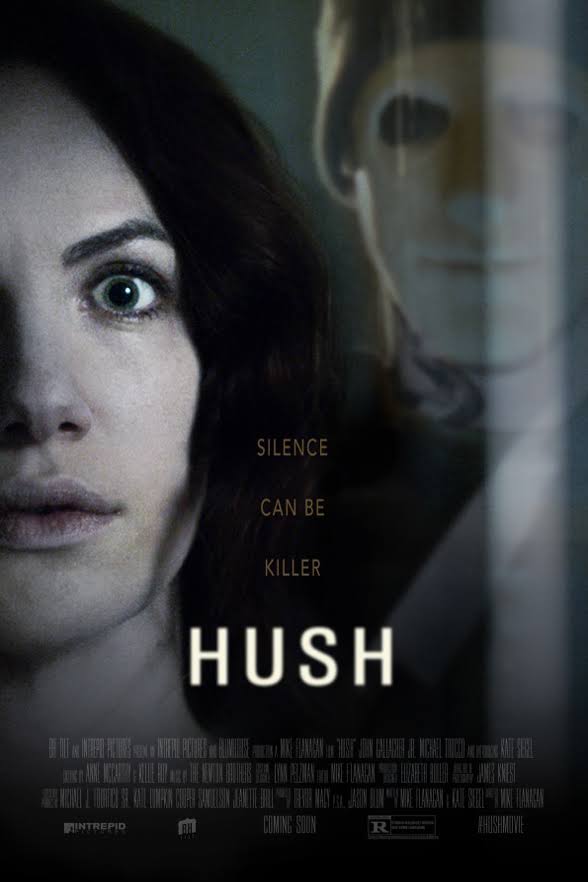 Director Mike Flanagan quickly gained a reputation for solid genre contributions with 2011’s Absentia and 2014’s Oculus, the latter especially with which I was particularly impressed. Therefore it was with considerable anticipation that I awaited his 2016 release, Hush. The film is co-written by and stars Flanagan’s wife, Kate Siegel, who plays Maddie, a deaf author who lost her hearing after a bout of bacterial meningitis when she was a teen. Maddie lives alone in a wooded area and it isn’t long before a masked psychopath is taunting her and biding his time before he’ll enter her home to kill her.

The cast does well, especially Siegel. The script is tight and Flanagan does great at creating tension, utilizing the relatively small location. I’ve always been partial to cat-and-mouse stories where opponents must try to outwit each other, and Hush displays this in exciting ways with both Maddie and her stalker having to use their brains to overcome a faster, stronger enemy. Also, while not a gory film, the violence, when it occurs, is effectively shocking. The result is a tension-filled single location drama which thankfully forgoes the normally predictable jump scares, and follows in the tradition of 1967’s Wait Until Dark and 1971’s See No Evil, which followed blind protagonists. What Hush adds to this company is our ability to see various scenarios play out in Maddie’s mind as she weighs her options, sometimes purposefully misleading the viewer to believe that things have gone terribly awry before pulling back to Maddie’s actual present state.

Hush is impressive, though it does fall victim to some heavy-handed foreshadowing that ultimately takes away some of the ending’s satisfaction. The film is so economical that anything introduced is essentially guaranteed to play a part later, but there are so few of these introductions that it becomes a waiting game for when certain elements will inevitably come into play. Thus the shock is absorbed too readily and the surprises become few, especially in the final moments. Nevertheless, Hush continues to reveal that Flanagan is a filmmaker worth keeping a keen eye upon, and I am still excited to see what comes next.