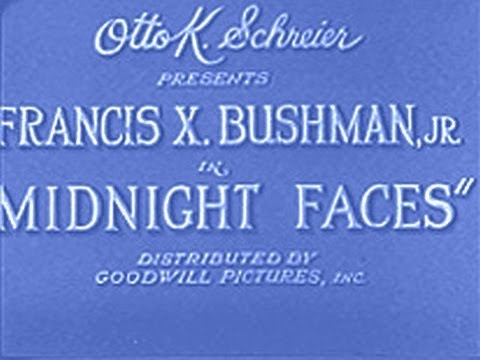 1926’s Midnight Faces is another entry into the “old dark house” subgenre, and is heavily influenced by The Bat, which had a tremendously successful run on Broadway beginning in 1920 and a film version which came out also in 1926. By comparison, Midnight Faces is a rather cheap imitation. Though the film is classified as a horror-thriller, comedy could easily be added to its descriptors.

The plot involves a young man, played by Francis X. Bushman, Jr., who inherits a mansion from his uncle which is nestled in a dismal Florida swamp. Though the house is supposed to be empty we see an intruder enter, and soon after the servants arrive it becomes apparent that threats are hiding within the dark recesses and behind secret passageways.

The movie has not aged well. The writing is rudimentary and mostly implausible nonsense and is overly reliant on stereotypes and genre tropes. As comic relief the film provides the character of Trohelius Snapp, played by Martin Turner, the loyal manservant to the protagonist. Turner was a talented physical comic who is nonetheless trapped in the racist stereotype of the black buffoon, spooked by every creak and bump and unable to exert self-control over his fear. He is not alone in the paper-thin tropes, as we have a Fu Manchu-looking Asian and a black cape-wearing prowler to add to the warmed-over stew. The director, Bennett Cohen, borrows heavily if not entirely successfully from Murnau’s 1922 masterpiece Nosferatu with its use of disembodied shadows grasping and reaching along walls and fixtures.

In the end, Midnight Faces is sometimes fun, most times flawed, and ultimately forgettable.

Midnight Faces is available on DVD.