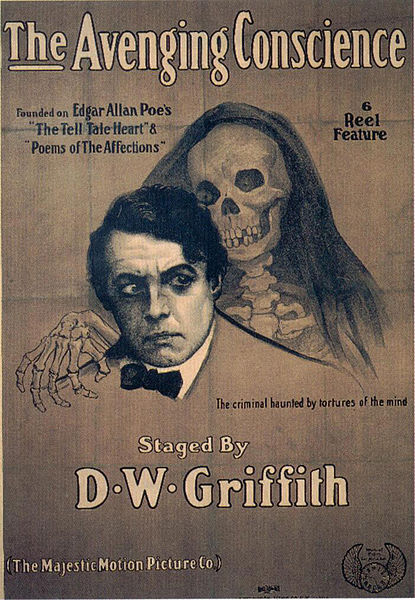 Movie Review – The Avenging Conscience: or “Thou Shalt Not Kill” (1914)

1914’s The Avenging Conscience: or “Thou Shalt Not Kill” is the earliest feature length American horror film. A year before D.W. Griffith, the greatest director of his day, would win fame and subsequent infamy for The Birth of a Nation (1915) – a masterpiece of filmmaking whose historical accuracy is less commendable – he used his talents to tell this horror tale inspired by Edgar Allan Poe’s short story “A Tell Tale Heart” (1843) and his poem “Annabel Lee” (1849). Griffith had already tackled the macabre in previous shorter works, such as 1909’s The Sealed Room, based on Poe’s “The Cask of Amontillado” (1846), and 1912’s The Unseen Enemy, which had the first appearances of the starlet sisters Lillian and Dorothy Gish in a Griffith film.

In some ways The Avenging Conscience is the opposite of 1913’s The Student of Prague from Germany. In that film I praised the effects but criticized the lack of close-ups and the slothful pace of the editing. D.W. Griffith, on the other hand, is a skillful director who effectively employs close-ups to set mood and explore character, and to communicate anxiety and madness. The editing is quite good and the film moves along swiftly enough. The camera placement is also interesting as Griffith has an eye for finding and employing outdoor locations, though the scenes of the garden party in particular become frivolous in retrospect. Griffith also uses symbolism to effectively communicate the inner workings of the main character, such as a spider eating a fly to show his growing murderous intent. Likewise, he uses editing and close-ups in stunning ways when the main character is being questioned by a detective, amplifying the paranoia as the audience is subjected to the subject’s fearful hypersensitivity, much as the narrator of Poe’s tale does. 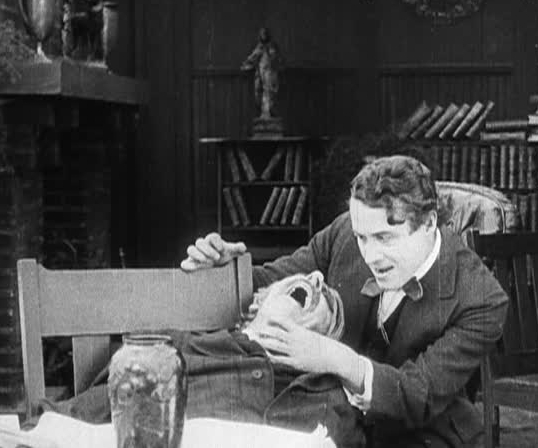 The acting is not as exaggerated as in many other silent films of the era, and the lead role is played wonderfully by Henry B. Walthall, who manages to hold a screen presence while communicating a wide spectrum of emotions. Also starring as The Italian is George Siegmann who would also appear in the silent horrors The Cat and the Canary (1927) and The Man Who Laughs (1928), both directed by the masterful Paul Leni. In 1915, the year following the release of The Avenging Conscience, Siegmann would suffer severe injuries in a car crash with future horror director Tod Browning, who was driving and who was also injured, and actor Elmer Booth, who died instantly. 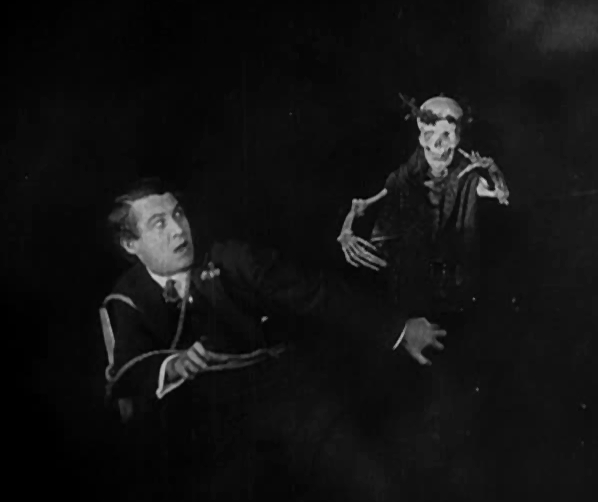 Where The Avenging Conscience has not age well, unlike The Student of Prague, is in its primitive effects, especially in the short fantasy sequence at the end which looks goofy at best and can be a distasteful distraction from an otherwise well-told story of tragedy and suspense. Though the movie takes initial inspiration from Poe it ultimately embodies an undoubtedly Victorian sensibility, substituting Poe’s psychological claustrophobia with a focus on Christian redemption. In this way, the film is far more Griffith than Poe. Nevertheless, one can still admire what Griffith was trying to accomplish – he was undeniably fluent in the language of film – and it’s still exciting for early horror history buffs like me to see the ways directors of the time were beginning to incorporate the macabre into their longer artistic endeavors.

1914, A Play of Light and Shadow, Horror, Movie Review, The Avenging Conscience