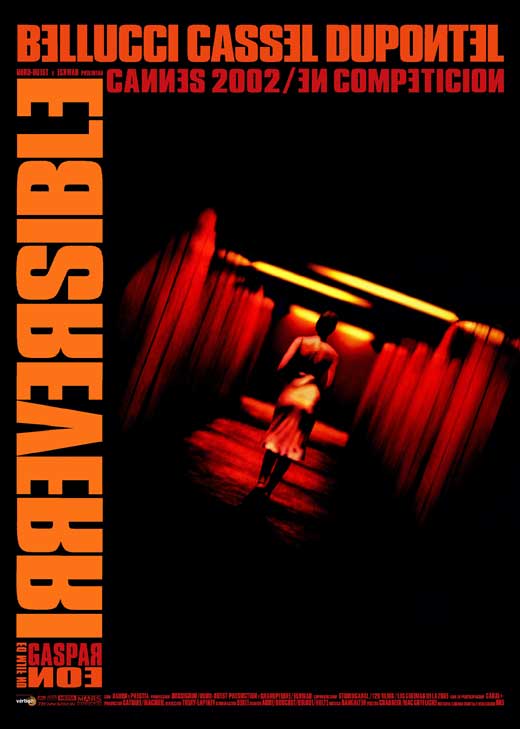 Films associated with the New French Extremity movement, by their transgressive nature, evoke strong reactions from viewers, most of which are negative. When 2002’s Irréversible was released at the Cannes Film Festival some fainted and hundreds walked out. Nevertheless it won the top award at the 2002 Stockholm International Film Festival and no less a critic than Roger Ebert, whose distaste for violent horror was generally well-known, gave it a positive review.

Irréversible is a work of body horror which early on shows unfettered perversity with a graphic murder of a man in a night club. Worse still, halfway through there is a minutes long rape and beating of a woman named Alex, played by Monica Bellucci. Throughout most of the film the camera sways and swirls, always moving and floating through walls like a ghost as a dolphin might come up for air. For the first thirty minutes a low hum is heard, designed to inflict nausea on the audience. But during this terrible violation the scene is continuous and the camera is still, locked on the attacker and his victim in each moment of agony. We hear all too clearly the grunts and muffled screams echoed in the red-walled underpass. It dares the viewer to confront the reality of rape by not allowing any means of escape. Like The Last House on the Left (1972) or I Spit on Your Grave (1978), Irréversible is not a film you are supposed to enjoy while watching. It’s a visceral experience that is meant to showcase violence in its true ugliness.

These elements are reason enough for most people to steer clear from this movie. However, for those willing to dig deeper there is an undeniable artistry in this film that moves it beyond gratuitous exploitation. Director Gaspar Noé, Bellucci, and co-star Vincent Cassel conceived of the story together. Only the framework of the tale was completed before filming and the dialogue one hears is almost entirely improvised.

The ever-moving camera, which could easily cause motion-sickness in some, is actually relevant to the narrative structure. The story told is non-linear beginning with the ending and working its way back, much like Christopher Nolan’s Memento (2000). As each scene ends we go back in time to the scene before. In terms of the narrative, the reason is suggested in what is actually the films first chronological scene where Bellucci’s Alex is reading the book An Experiment with Time by John William Dunne. Published in 1927, the book deals with concepts such as precognition and posits that all time is happening now and that past, present, and future are constructs of our mind’s inability to perceive it all at once. Therefore the camera may in fact be the perspective of a time traveler – it may in fact be Alex herself.

But there are artistic reasons for the structure as well. Each scene is given a weight that would not be there otherwise. With the gift of hindsight we see the decisions that the characters make that, while seemingly small in the moment to them, will have profound effects. As Roger Ebert in his review poignantly noted: “To know the future would not be a blessing but a curse. Life would be unlivable without the innocence of our ignorance.” Monica Bellucci is an exquisite woman, but already knowing her fate before seeing her in her silky, body-hugging dress makes her look more vulnerable than attractive. Sex features heavily in the story, and Noé gives us the terribleness of it in the first half, but he leaves us with the love and intimacy of it by the film’s end, if not the story’s. It’s a bit of salve to heal our mental wounds.

The title can be applied many ways to the film, but like the name suggests, Irréversible is a movie you can’t unsee, and it’s not a film most will want to watch a second time. Regardless, it’s an abrasive yet interesting movie that is smartly conceived and manages to say something valuable about the human experience.