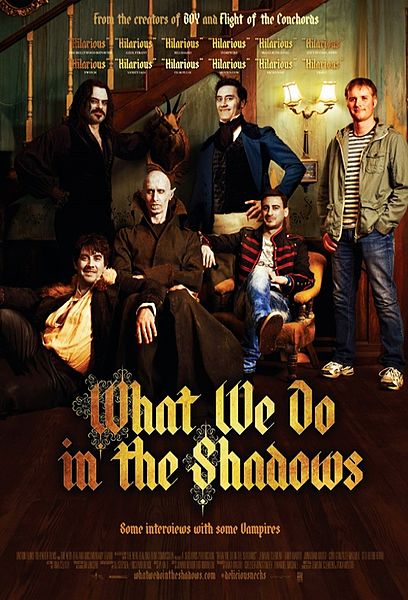 What We Do in the Shadows (2014) is a horror-comedy mockumentary that doesn’t try to break new ground with vampires, but retread old tropes in funny, inventive ways. Directed and written by Taika Waititi and Jemaine Clement, who both also star in the film, it’s backward looking in the most endearing way, paying homage to the vampire’s various on-screen forms via the unlives of four vampire flatmates living in Wellington, New Zealand. There is the foppish Viago, played by Waititi, something of a Hammer Films Production dandy, who loves his antiques and pines for a woman he let go many years ago. There is the youngest, Deacon, a New Romantic who takes many of his vampiric cues from the rebels in The Lost Boys (1987). We also have the medieval-minded Vladislav the Poker, played by Clement, who represents a Gary Oldman-style Dracula who has lost his mojo. Finally there is Petyr, an 8,000 year-old feral rat-like figure in the vein of Orlok in Nosferatu (1922), who lives in the basement (which may be a comment on where the traditional vampire now resides in current cinema, thanks to films like Twilight).

Unable to leave their flat during the day, the quartet have been unable to adjust to twenty-first century life and mostly bumble their way through their various bloody conquests. Along the way they meet a young, reckless vampire and his friend Stu, a human IT tech who they inexplicably gravitate towards as he teaches them about new technology.

Stu: [Showing the vampires Google] “Anything you want to find you type it in.”
Viago: “I lost a really nice silk scarf in about 1912.”
Deacon: “Yes, now Google it.”

Shadows is fast-paced and fun, and even when you see the jokes coming their execution is still effective and hits just the right amount of silliness. Like a This Is Spinal Tap (1984) for vampires, the movie wants these characters to succeed despite their ineptitude (and the fact that they’re serial killers). Some of the funniest scenes involve their rivalry with werewolves (not “Swear-wolves”) who appear to be part of some kind of twelve-step program. There are also many choice lines, such as when Deacon admits, “I think we drink virgin blood because it sounds cool.” To which Vladislav adds, “I think of it like this. If you are going to eat a sandwich, you would just enjoy it more if you knew no one had fucked it.” It’s one of those films that feels like it will get funnier with repeat viewings.