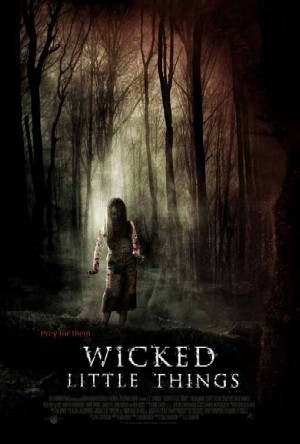 2006’s Wicked Little Things (also known as Zombies) is a zombie-esque tale directed by J. S. Cardone, who would go on to write the atrociously bad 2008 Prom Night remake. The revenge plot takes a great deal from John Carpenter’s The Fog (1980) as kids killed in a 1913 mining accident roam the woods each night as murderous, flesh devouring zombies, hacking apart whatever they come across with mining tools. Why? Well, the movie never explains this. Yet unfortunately for a widow (Lori Heuring) and her two daughters, played by genre-favorite Scout Taylor-Compton and a young Chloë Grace Moretz, they move into the accursed Bulgarian – I mean, Pennsylvanian – woods and have to contend with the pasty, ravenous brats.

While the thin premise is still a solid basis for a horror film, Wicked Little Things is a fairly banal, paint-by-numbers affair. There are no surprises and the audience will be many steps ahead of the characters the whole way through. The gore is not excessive and truly, if it had been cut, this film could easily have garnered a PG-13 rating and played on television.

The characters and plotting will likely irritate viewers, as they did me. Here are just a few things that had me glaring at the screen:

Wicked Little Things will kill an hour-and-a-half if you need it to, but so will watching a good horror movie.