Hellbound: Hellraiser II (1988), the sequel to 1987’s Hellraiser, is the perfect companion piece to the previous film. I cannot watch the first without immediately wanting to watch the second, and in many ways the two feel like segmented parts of a single feature. Taking place immediately after events of the first film, the plot follows Kirsty (Ashley Laurence) as she tries to use the Lament Configuration, a demonic puzzle box, to open a portal to Hell to retrieve her father, who she believes is suffering there. With her is a fellow hospital patient and mute teenage girl named Tiffany (Imogen Boorman) who has a knack for solving puzzles and whose talent has been exploited by Dr. Channard (Kenneth Cranham), who himself is trying to solve the box to seek the legendary experiences of the Cenobites. Channard resurrects Julia (Clare Higgins), seeking her help, and all four end up descending into the regions of Hell.

Directed by Tony Randel, with a screenplay by Peter Atkins based upon a story by Clive Barker, Hellbound plays far more like a horror fantasy. In fact, as Kirsty is running through the mazes of Hell, which looks very much inspired by an M.C. Escher drawing, in search of her father, I can’t help but be reminded of Sarah running through the Goblin King’s realm in search of her brother in 1986’s Labyrinth. This bend towards storybook fantasy is even admitted by the characters when Julia tells Kirsty, “They didn’t tell you, did they? They’ve changed the rules of the fairy tale. I’m no longer just the wicked stepmother. Now I’m the evil queen. So come on!” and then, “Take your best shot, Snow White!” This allows the more unbelievable plot twists to be more acceptable if viewers see them through this fantastical, almost dreamlike lens. 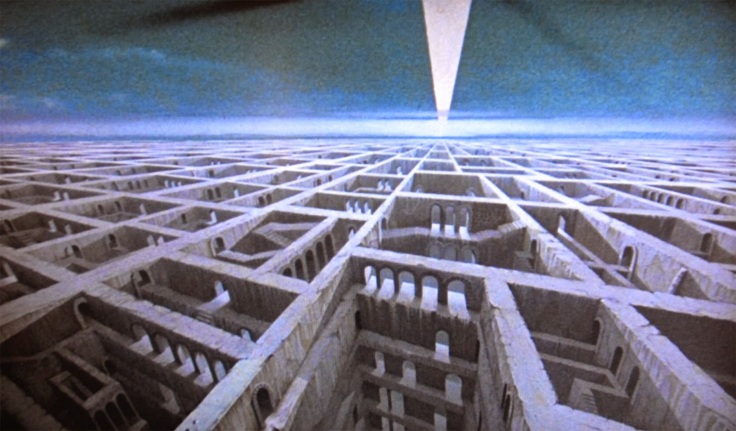 The themes of excess, desensitization, and desire from the first film remain strong, with the turning Leviathan in the center of Hell’s maze being referred to by Julia as “God of flesh, hunger, and desire.” Of the puzzle box, Pinhead says, “It is not hands that summon us. It is desire.” Hell is of one’s own making, taking the forms that the individual’s mind creates. As Channard tells his students while he performs brain surgery:

“The mind is a labyrinth, ladies and gentlemen, a puzzle. And while the paths of the brain are plainly visible, its ways deceptively apparent, its destinations are unknown. Its secrets still secret. And, if we are honest, it is the lure of the labyrinth that draws us to our chosen field to unlock those secrets. Others have been here before us and have left us signs, but we, as explorers of the mind, must devote our lives and energies to going further to tread the unknown corridors in order to find ultimately, the final solution. We have to see, we have to know…”

For Frank, Kirsty’s villainous uncle from the first film, Hell is nude women writhing, whimpering and moaning with desire, begging to be touched but always unreachable. Even in Hell there is no satisfaction, and that is the worst torture.

Hellbound is rich with imaginative filmmaking and impressive gore. Julia’s rebirth through the bloodstained mattress, in particular, is masterful. However, its style outweighs its attempt at character development, with Julia being the only character with any real nuance. Really, the Cenobites are awesome to behold but this is ultimately her movie, as Barker had originally intended Pinhead to end here and Julia to step up as the main franchise villain. However, Clare Higgins was uninterested in reprising her role in further films, which is actually a shame as her character’s progression was the most interesting arc through both entries.

Though I know many disagree with me, I prefer this installment to the first film, if only by a small measure. Its style has always spoken to me and the audacity of its dark reverie has continuously drawn me in. When I think of the franchise, this film and its images are what are conjured in my mind. It’s nightmarish and attractive all at once, as a movie with Hellraiser’s themes should be.