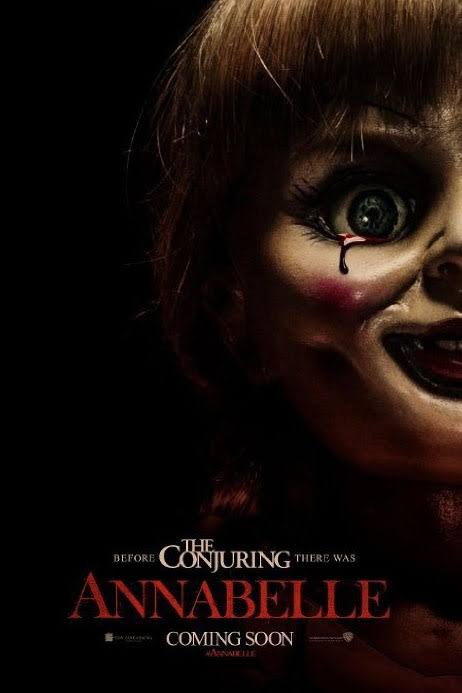 2013’s The Conjuring, directed by James Wan and based upon the claims of real-life paranormal investigators Ed and Lorraine Warren, was a massive hit. Wan’s smart direction elevated even the hokiest script elements and made even my personal distaste for the Warrens palatable. One of the most memorable images of the film was of the “possessed” doll, Annabelle. The real Annabelle is a Raggedy Anne doll that resides in a glass case in The Warren’s Occult Museum, but Wan decided to instead create a porcelain doll with a sinister smile and deathly pallor. I have an aunt at whose house I slept over many times when I was young, and I would often bed in a room filled with antique porcelain dolls, their ghostly pale faces staring at me in the moonlight. It’s likely due to my largely skeptical nature that I ever closed my eyes.

Of course, the inevitable Annabelle spinoff was expected, because… Hollywood. The film is directed by John R. Leonetti, who has only two other films to his directorial name, one of them being 1997’s Mortal Kombat: Annihilation, panned by critics and fans alike and often listed as among the worst sequels in history. While this leaves little promise for the viewer, what Leonetti has lacked in directorial craft he has made up for in talent as a cinematographer, bringing a wonderful mise en scène to multiple Wan films, including Insidious (2011) and The Conjuring.

Annabelle is a prequel to The Conjuring and follows a young married couple as they expect a baby. The doll is given by the husband to the wife and soon violent events transpire to attach a hippie demon to the doll. I’m not kidding. The script for the film is unfortunately lackluster and tends to meander. Also, right from the beginning it is inconsistent with The Conjuring despite recreating that earlier film’s opening scene with the nurses talking with the Warrens about the doll. In that scene, the film clearly displays on the bottom of the frame, “Annabelle Case – Year 1968”. Therefore, because we can count, we expect this prequel to take place either in that year or prior. But instead in Annabelle we see news footage of the Tate-Labianca murders by the Manson Family, which took place in August of 1969, and several months pass throughout the film which would put us safely into 1970, at least. This may seem like a minor quibble to most, but when basic chronology is ignored so blatantly is serves as an ill omen of what may come. There are other anachronistic elements, but I’m so anal as to list them all here. I don’t expect historical fidelity in films, despite my wishes to the contrary, though I do expect a franchise to follow its own timeline, especially when evoking the period is such a characteristic element. However, one plot hole which bothered me that I believe bares mention is that we are multiple times drawn to the fact that the couple can hear the people who live above their apartment, but we see many times, in many ways, that the couple lives on the top floor.

The beginning of the film makes several references to the societal changes of the 1960s, with mention of the neighbor’s daughter running off with “the hippies” and talk of keeping the door locked because “it’s a different world.” The Manson murders serve to further illustrate this. However, the cumulative effect, while perhaps unintentional, is to depict hippies in an exclusively negative light, as the only ones we see are of Manson’s ilk. Had these real life murders not been introduced, the movie may have in fact been improved, not to mention more chronologically sound. It may be in keeping with the contemporary fears of more conformist factions, but viewers having no knowledge of the peace movement or of the benign character of Woodstock could easily come away thinking 1960s counterculture was about murderous cultists out to destroy the lives of clean-cut, church-going, Barry Goldwater-loving Americans. With The Conjuring beautifying the Warrens, both their dubious paranormal claims and their staunchly Catholic approach, I can’t help but feel that the franchise is destined to be very politically and socially conservative, whether by inspiration from its source material or by design.

Annabelle Wallis does fine as the main protagonist, Mia Form, and the rest of the cast also are serviceable. Many nods are made to 1968’s Rosemary’s Baby, but the film forgets to surround their main girl with interesting characters and dynamic actors, which that classic film did so well, making the goings feel overly drawn out. As I watched I kept asking myself if this young couple has parents or friends, for their inclusion may have added a desperately needed dynamism to the story or presented further opportunities for scares while allowing the couple to not suspect the doll sooner without appearing overly dense. The ending of the film, too, is rather drab.

However, there are some impressive set pieces that Leonetti is able to orchestrate, particularly a well-paced home invasion early on in the film and a few effective jump scares, none of which are, thankfully, fake. Also, Wan returned to direct a tension-filled elevator scene. There also some less effective, and unintentionally funny, scares along the way, but they’re not so pervasive as to ruin the film.

Annabelle is, like a knockoff doll, a film of varying quality. There are some finely crafted pieces held together with cheap stitching and seams which continually show, ever threatening to come undone.