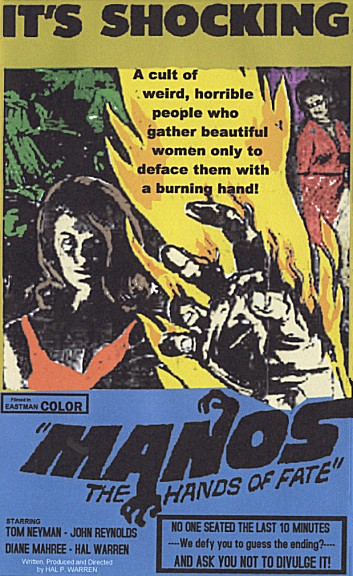 Poor Stirling Silliphant, the Academy Award-winning screenwriter. We thought we had left him behind after his vicarious relationship to 1964’s The Creeping Terror, but the trickster Deities of Terrible Movies were not done with him. While in a Texas coffee shop he happened to bump into local fertilizer salesman and amateur thespian Harold P. Warren, with whom he was friendly. Warren declared to Silliphant that anyone could make a horror movie and went so far as to bet him that in fact he could do so, and he immediately began sketching his ideas on the coffee shop’s napkins. His story, taking some obvious cues from Dracula, involves a family who becomes lost while on vacation and end up at a remote home which houses a nefarious cult. The film was tentatively titled The Lodge of Sins, however, during post-production Warren changed it. The first clue for viewers that what they are about to see is incompetent is the movie’s final title, Manos: The Hands of Fate, which translates with ludicrous redundancy to Hands: The Hands of Fate.

Warren set about gathering his cast from the local theater, including John Reynolds as Torgo and Tom Neyman as The Master, and young women from a local modeling agency to play The Master’s wives. Also prominent is the beautiful Diane Mahree as Margaret. Warren, not surprisingly, cast himself as the film’s hero, Hal. Not having enough money to pay his cast, he instead promised them a share in the profits. Warren’s hand-wound camera could only record 32 seconds at a time and sounds were added, incompetently, during post-production, by only a very few people.

The resulting film is one of the most tedious cinematic experiences of my life. Never have 70 minutes felt so long. Manos abounds with slothful driving sequences (which Warren had intended to use for credits, but never did), frustratingly poor editing (with the clapper visible at one point), and the camera lingering uncomfortably long on actors, who sometimes appear just as frustrated. The plot is largely incoherent, especially as Hal bullies his way into a clearly dangerous situation, and as I write this shortly after seeing the film I’ve already forgotten most of it. The pacing is dull and the experience soporific. I felt that had I been dying while watching it the result would be similar to the effect which mesmerism had on the title character of Edgar Allan Poe’s “The Facts in the Case of M. Valdemar” (1845), with me also in a permanent hypnotic state upon the edge of oblivion, unable to leave consciousness, but instead of talking with surrounding physicians I would be forever watching Torgo’s maddeningly twitching face.

I’d take the fate of the Lament Configuration over this any day. The Beast of Yucca Flats (1961) was a disjointed snooze, but at least it was brightly lit enough to see what was (or wasn’t) happening. Add to this a superfluous scene of two teens making out (one of the models broke her leg so Warren reused her here) and being hassled by the cops, and other shots that are confounding in their unnecessity, and the experience becomes ever more trying. At the least the mind-boggling cat fight between the wives is sort of entertaining.

However, I’ve yet to fully explain the worst aspect of Manos. John Reynolds’s Torgo is one of the most infuriating performances I have ever watched, with his erratic mannerisms and his awkward waddling with cartoonish swollen thighs (he’s supposed to be a satyr, but that never comes across in the film). Reynolds is like a man on drugs – in fact, he is a man on drugs. He was high on LSD while filming, and it shows. The aggravating, stuttering voice-over work doesn’t help matters. As I watched Torgo I couldn’t help but be reminded of a porn VHS tape from the early 80s I somehow once got a hold of when I was young. There was a scene in which the performers were clearly out of their minds with drugs, saying their lines over each other with no rhyme or reason. One of the women forgot all about the set up dialogue and began immediately fellating the delivery guy while he was still trying to remember and deliver his lines in pathetically slurred speech, swaying drunkenly in the doorway. It took him five minutes to realize the sex had already begun. At that pubescent age my libido was on a hair trigger, but even then I could only look on uncomfortably until I finally shook myself from my stupor and hit the fast-forward button. Watching Reynolds struggle through his lines produced a very similar effect. 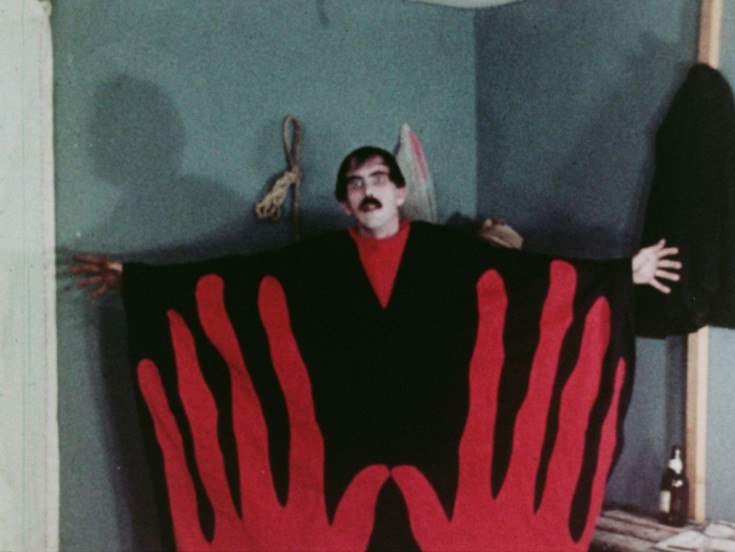 Reynolds was ultimately a tragic figure who didn’t live to see the film’s premiere. As Bob Guidry, the Director of Cinematography, once explained: “He killed himself about six months after the movie was finished. John was a troubled kid; he didn’t really get along with his dad, who was an Air Force colonel, and he got into experimenting with LSD. It’s a shame, because he was really a talented young actor.”

Because at rare moments the universe is a just place, the local premiere of Manos: The Hands of Fate was not met with glowing reviews and the film fell largely into obscurity until Mystery Science Theater 3000 resurrected it for their show in 1993. If one is as morbidly curious as I was to see this film, I strongly suggest you do so with the help of the MST3K team, because even if with their remarks this film is still an absolute endurance test.